It is heartening to see 33,000 plus people join the group 'Clean India' created on the My Gov site MyGov.in. The pragmatic suggestions of the group members ensure that the vision of Hon'able Prime Minister to create a 'Swachh Bharat' by the time India marks the 150th birth anniversary of Father of the Nation, Mahatma Gandhi will be a reality. 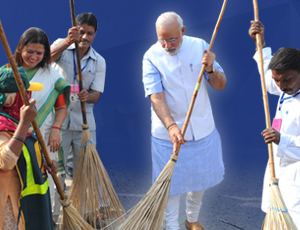 The fast growing group in terms of members has come up with numerous ways to make India Clean. The group while hosting discussion on the following topic should issues of urban and rural cleanliness be tackled differently and can a single approach provide solutions to all problems related to cleanliness, suggests below mentioned worth implementing points:

To avoid manual scavenging the suggestions received were to pass a law. Also municipal corporations who practise it should be made aware of alternatives and fined heavily if found breaking the rule. The other suggestion was to go for competition for a green toilet. Many members suggested that many a times municipal corporations have machines to clean but they lie in neglect and manual scavenging continues. This as per the members should be stopped as soon as possible. Members also suggested construction of bio-toilets in rails and creating community toilets in villages. However, most suggested that the evil practice of manual scavenging can be only stopped by educating and inspiring people.

The suggestions received for how to commemorate Mahatma Gandhi’s 150th birth anniversary with special focus on cleanliness received numerous comments like:

The most happening section of the group is where the members put their comments after visiting schools and presented their reports on the hygiene standards maintained there for mid-day meals. Have a look at what two members experienced when they visited government schools:

You can join this Group, if you are signed in!!